Britain is in a tizz over when it is or isn’t acceptable to wear the face veils often associated with the Islamic religion. A judge has ruled that a Muslim defendant in a Crown Court may not cover her face while giving evidence, though may at other times. A college has recently rescinded a general ban on covering the face. There are reports of Muslim schools forcing girls as young as 11 to cover their faces, and Home Office minister Jeremy Browne has called for a “national debate” on the issue.

The rights to individuality, to decide what to wear, and to express one’s religion in one’s clothing are clearly part of our societal freedoms. Yet, equally clearly, this right is limited and is weighed against other factors. For example our society accepts the right of employers to ask staff to wear a uniform, and the right of schools to adopt a uniform.

Claiming “religious freedom” makes other people timid and reluctant to challenge a clothing choice, even if it is inappropriate and even if a similar choice by the non-religious would not be accepted.

Yet, once one properly understands the concept of religious freedom the right outcome is usually clear. The problem is that many people don’t understand the concept. Many people think that “religious freedom” grants you extra rights, rights to do things that you could not do if you were not religious. This would violate the basic principle of equal treatment and the equal citizenship of everyone; we should not accept that religious people get extra privileges, as though their preferences and sensibilities count for more than those of the non-religious.

Article 9, of the European Convention on Human Rights enunciates religious freedom as it applies in Britain:

Everyone has the right to freedom of thought, conscience and religion; this right includes freedom to change his religion or belief and freedom, either alone or in community with others and in public or private, and to manifest his religion or belief, in worship, teaching, practice and observance.

Many societies have previously restricted (or still do restrict) the manifestation of religion to a much greater extent than other allegiances. Historically, a state had an established or preferred religion, and while one could manifest that religion, dissenting from that religion or manifesting any other religion could get you punished, including the death sentence. Even today, countries such as Saudi Arabia prohibit the public manifestation of any religion other than the approved one. Holding a Bible-reading in a public square in Riyadh will get you arrested sharpish.

Thus “religious freedom” means that you do not have fewer rights to manifest your religion than people of any other religion do, or than those manifesting any other type of allegience do. It does not grant you more rights, it doesn’t licence you to do something that a non-religious person could not.

Neither in the European Convention nor in the UN’s Declaration of Human Rights is religion given special status, it is merely an instance of a more general freedom of thought and conscience. The concept of “religious freedom” thus arises as an implementation of rights that we all have, whether religious or not. 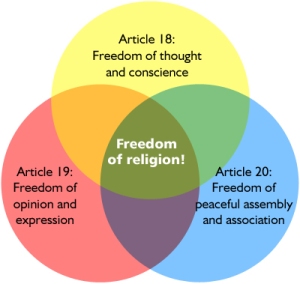 The upshot is that, if a rule is there for a good reason, a purpose nothing to do with religion, and if people in general are expected to comply with it, then a religious person should comply with it to the same extent.

Unfortunately this basic principle of equality is not appreciated as widely as it should be. People bend over backwards to indulge the religious and give them extra licence.

In the case of a Muslim woman asking to wear a face veil in court, the judge decided that he had to “adopt the least restrictive approach consistent with what I see as the necessity of enabling the Court to conduct the proceedings fairly and effectively”, in other words going to any lengths that he reasonably could to accommodate the woman’s religion.

While ruling that the woman must not wear the veil while giving evidence, he ruled that she may at all other times. Why? Would a non-religious defendant be given similar latitude to wear a balaclava, or would they told to take it off? The judge also ruled that while giving evidence the woman could be screened from the public, and that no-one was permitted to sketch any likeness of her.

Really? Is it not a principle that “not only must Justice be done; it must also be seen to be done”? We have public courts for this reason, and anyone can observe a trial or observe the defendant. Further, the jury has always been able to observe the defendant throughout the trial, reacting to evidence, and not just when in the dock.

We do accept screening for good reason, such as for a child or for a rape victim being forced to relive an ordeal, but with this ruling Judge Murphy seems to be creating a general right for any defendant to hide their face from all but the jury, judge and counsel.

At least, if he is not doing that then he is elevating religious people to special privilege above the non-religious. Article 9, from which Judge Murphy derived his ruling, talks of manifesting “religion or belief”. So any other belief could presumably give rise to a request to prohibit court sketches and give evidence behind a screen. As the judge said in his ruling: “… should an analogous situation arise; and it applies alike to both male and female defendants of any, or no, religious faith”.

Would a defendant’s desire to reduce publicity suffice? Or a belief by a culprit that he might be recognised by other victims, if his face were seen in public? Or a belief that the court artist wouldn’t produce an image consistent with the defendant’s vanity? The only proper answer to such questions is that none of them suffice, and given the long-standing principle of open courts, a religious defendant should not be granted any more indulgence to hide her face than anyone else.

A further consequence of a proper understanding of “religious freedom” is that it obviates any need for the state to rule on what is or isn’t religion, or on what is or isn’t required by a particular religion. It’s sometimes suggested that Islam does not require face covering. That may or may not be so, but it is irrelevant since (under a proper understanding of religious freedom) a personal preference counts just as much as requirement declared by religious authorities.

How do the above principles apply to related veil disputes? Would a general ban on wearing a burqa in public be appropriate? No, since there is no ban on wearing balaclavas or other types of face masks. A singling out of one type of face-veil that is worn for religious reasons would thus be a denial of religious freedom. 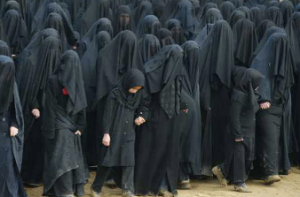 Can, though, an employer insist on an uncovered face? Yes, for the same reasons that they can request a dress code or uniform expressing corporate identity or standards.

It is common (for good security reasons) for a bank to ask motorcyclists to remove a helmet before approaching a cashier. And it is common for a petrol station to ask a motorcyclist to remove a helmet (and so be observed by CCTV), before fuel is dispensed (thus reducing drive-offs). Can the same be requested of those wearing veils? Yes, it can, and that is not a violation of religious freedom, since the rule is there for genuine secular reasons. To exempt a burqa-clad lady from a requirement applying to a helmeted motorcyclist is not religious freedom, it is religious privilege.

Can a school require that neither pupils nor staff should cover their faces? Yes of course, if that school feels that face coverings would hamper communication or learning or the sense of community. We accept dress codes and school uniforms, as helping to enhance cohesion and reduce divisions and one-upmanship between children.

Can a school require a face covering, either by children or staff? No, since there is no valid secular reason for such an imposition, and thus the requirement would violate the religious freedom of the staff or pupils. The same applies to a requirement to cover the hair. It is most certainly wrong for a taxpayer-funded school to “wish to create an Islamic environment within the school” by requiring that “clothing must cover the entire body, only the hands, face and feet may remain visible” and that “the design of the clothing must not display any symbols of other faiths”.

In summary, assessing the acceptability of the niqab or burqa is straightforward. Simply ask the question of whether a balaclava or other face covering would be accepted? If the answer is “yes” then a burqa should be acceptable; if it is “no” then nor should you accept the burqa — unless you think that believing in religion grants believers special privileges, or unless you don’t think that but are too timid to say so.