This piece was commissioned for the Richard Dawkins Foundation for Reason and Science and is reproduced here.

With the approval of Britain’s Supreme Court you can now be married in England by the Church of Scientology, the cult founded by the science-fiction writer L. Ron Hubbard. What next, Jedi or Doctor Who-themed marriages? Well, actually, you can already have a Jedi-themed marriage, so long as you don’t claim it is religious. That’s because of a rather bizarre divide in British law that says you can have a secular marriage (themed however you like) so long as there is no religious content; or you can have a religious marriage, for which you need to go to a place of religious worship on the approved list.

Prior to 1837 there was only the religious option, with a choice of Church of England, Quaker or Jewish (Catholics and the non-religious had to pick one). When the rules were extended to allow a secular alternative the churches flexed their muscles and insisted on the “no religious content” rule in order to preserve their monopoly over religious matters. Thus, when the new-fangled cult of Scientology came along, the High Court judges turned up their noses and said, no, it couldn’t get its churches onto the approved list because there was insufficient “reverence for God or a deity” going on in them. 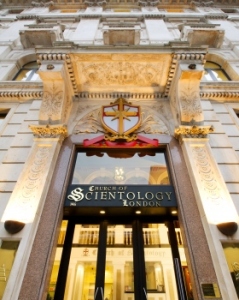 That was 1970. The difference between a “cult” and a “religion” is that the latter have been around longer, and we’re now in 2014. Thus the Court has ruled (after some rather tortured theological analysis) that Scientology is now a religion and can indeed perform marriages.

Should secularists welcome this? Yes indeed. It is no part of a state’s business to get involved in theology or to pronounce on what is or is not a religion. Nor should the state say that you can’t have religious content in your wedding unless you go to one of the approved religions. It should set some minimum standards for wedding locations and celebrants and leave it at that. We’ve accepted that the Established Church no longer has a veto on gay marriage, so why should it have a veto on your wish to include a hymn in your otherwise-secular wedding?

“As to religion, I hold it to be the indispensible duty of every government, to protect all conscientious professors thereof, and I know of no other business which government hath to do therewith”, wrote Thomas Paine back in 1776. One business that the state should certainly stay out of is certifying approved religions and declaiming on religious doctrine. The only reasons for it doing either are to penalise someone for being religious, or to grant them extra rights and privileges. No-one today would argue for the former, but too many think that the latter is a right, and that being religious entitles you to extra freedoms. That blatantly contradicts the fundamental secular principle of equality under the law. “Religious freedom” doesn’t grant you extra rights, it just means you can’t lose freedoms owing to someone else’s dislike of your religious views.

Thus the Scientology ruling is in essence a victory for religious freedom, the principle that your religion cannot be judged as inferior by the High Court judges of an Established Church who complain that you don’t venerate the deity sufficiently. Of course Scientology is still a nasty and dangerous cult, nothing in this ruling changes that, but being benign and peaceful has never been a qualification for being a religion.

Government minister Brandon Lewis was not impressed, saying that he was “very concerned about this ruling, and its implications for business rates”, and that “hard-pressed taxpayers will wonder why Scientology premises should now be given tax cuts when local firms have to pay their fair share”.

Some of us, Mr Lewis, feel the same way about the other religions. The answer is obvious, isn’t it? Being religious should not get you tax breaks! A church can fairly ask for tax exemption on any actual charitable activity that helps those outside the church, but otherwise it should be treated as any other life-style choice. Haven’t we got beyond the presumption that religions are an automatic public good? Scientology most certainly is not. If we’re all in society together as equals, shouldn’t the same taxes apply to all?

If there were no tax implications and no automatic privileges for the religious then there would be no reason for the state to opine on religious matters. Let’s hope that the labelling of Scientology as a religion helps to discredit the idea of religious privilege, but attitudes across the world are currently inconsistent. Scientology gets tax breaks in Australia, New Zealand, Spain, Sweden and the United States, but not in Belgium, Canada, Denmark, France or Germany. The way forward is not to aim for better consistency about which religions qualify, but to realise that religious status should be irrelevant and make no difference.

In another recent High Court case the judges corrected an earlier ruling, which had held that resting on the Sabbath was not a requirement for a Christian — sorry, that is for the individual Christian to decide — but then rightly concluded that it didn’t matter, and that the religious preferences of the plaintiff were secondary to the need of the employer to have work done on a Sunday. A desire to take Sunday off for religious reasons should count for no more — and no less — than a desire to take Sunday off to watch your kids play football. Once the principle of religious freedom and equality is both accepted and properly understood there will be no more need for courts to make rulings on religious matters. They should leave that to the priests and theologians.