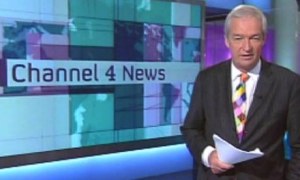 Snow: Answer me the question that everyone keeps asking. Is this caused by climate change?

Snow: I like that answer, but of course it’s not a scientific answer is it?

Aaargh! Obviously we’re getting nowhere in educating the public about science if a leading journalist such as Jon Snow thinks that being uncertain is “unscientific”, when in reality being uncertain is exactly the scientific response to partial and unclear evidence.

Well done to Mr McKenzie for his excellent “quite probably” answer and for explaining that, yes, his answer was indeed scientific:

McKenzie: Well it is a scientific answer. It’s really hard for us to say with certainty that this is down to climate change, but this is the sort of event that we think will happen if we have climate change.

Is this partly due to school science education? School-level science deals almost entirely with known science, stuff that has been worked out and evidence accumulated to the extent that it is certain1, and is quite rightly presented as such. But things are very different at the cutting-edge where partial and unclear evidence is ubiquitous. Are schools failing in teaching what science is actually about, that it is really about attitudes and methods for attaining new knowledge and for dealing with uncertainty?

That which science has already discovered is of huge importance and underpins our whole society, so teaching kids about what we already know is essential, but an appreciation of the nature of the scientific process is also essential for genuine literacy in science.

One could hope that this has improved in the decades since Jon Snow went to school, but in some ways we are going backwards. British science exams nowadays are often about rote learning, about very closely specified mark schemes, and about memorizing the exact word or phrase that the mark scheme requires. Is it too much to hope for school science based on understanding, on problem solving, intellectual exploration and scientific attitudes?

(1. Not absolutely certain but sufficiently certain that any withholding of assent would be perverse.)

2 thoughts on “Jon Snow, climate change, and the nature of science”