Whenever I argue that morality is subjective I encounter people who regard that idea as so unpalatable that they are determined that we must find a scheme — somehow, anyhow — in which morality can be regarded as objective. The term “subjective” has such negative connotations. I argue here that such connotations are not justified.

If we ask what morality actually is, the only plausible answer is that morality is about the feelings that humans have about how we act, particularly about how we treat each other. This was proposed by the greatest ever scientist, Charles Darwin, who in Chapter 3 of his Descent of Man stated that that “moral faculties of man have been gradually evolved” and added that “the moral sense is fundamentally identical with the social instincts”.

He explains that in social animals such instincts would take the form that in each individual:

… an inward monitor would tell the animal that it would have been better to have followed the one impulse rather than the other.

The world’s greatest philosopher, David Hume, had earlier arrived at the same conclusion. In his An Enquiry Concerning the Principles of Morals Hume explained that “morality is determined by sentiment”, saying that “in moral deliberations” the “approbation or blame … cannot be the work of the judgement”, but is instead “an active feeling or sentiment”.

In these sentiments then, not in a discovery of relations of any kind, do all moral determinations consist. . . .

… we must at last acknowledge, that the crime or immorality is no particular fact or relation, which can be the object of the understanding, but arises entirely from the sentiment of disapprobation, which, by the structure of human nature, we unavoidably feel on the apprehension of barbarity or treachery.

No-one has ever suggested any alternative account of morals that makes the slightest sense. The main alternative suggestion is that morality is about the values and feelings of gods, rather than of humans, but we have neither hide nor hair of any gods, whereas we know that humans exist and have evolved.

Given our evolutionary past, in a highly social and cooperative ecological niche, we will inevitably have been programmed with moral feelings, feelings about how we act towards each other. Thus morals are rooted in human values and in what we like and dislike. That makes morals, at root, subjective, since the term “subjective” means “based on or influenced by personal feelings, values and opinions”.

Whether an act is regarded as “morally good” or “morally bad” must, in the end, be a statement about how humans feel about the matter. No viable alternative has ever been proposed.

In a similar way, one can set up a moral framework by declaring axioms such as “the moral thing to do is to maximise the well-being of sentient creatures”. Given that axiom, it would then be objectively true that, for example, torturing children for no purpose would be immoral. Excellent! People really do feel that torturing children for no purpose must be objectively immoral, that is, immoral in some way beyond “mere” human feelings.

But this approach doesn’t get you an objective scheme, despite how superficially appealing it might be. First, whence that axiom? Unless you can derive that axiom from first principles (which no-one ever has), you are simply declaring it as your moral opinion. Which makes the framework merely a report of your own subjective values. The only normative standing that such a framework has is through your advocacy, or that of other humans, and that suffices to make the scheme just as subjective as anything else.

Second, any notion of “well-being” depends entirely on what people like and dislike, even if it is as basic as the human preference for being alive and healthy over being diseased or dead. All this axiom achieves is placing the subjective element at one remove, sufficiently far that people can fool themselves that they’re on the track to a truly objective morality.

So why are people so unwilling to accept the — surely? — blatantly obvious truth that morals are all about human feelings and values, and thus are subjective? I consider that it results from several misconceptions about what morality being “subjective” entails.

Subjective does not mean unimportant!

Saying that morals are “subjective” does not imply that they are unimportant and disposable, in contrast to “objective” morals which would necessarily matter.

In contrast, if morals were “objective” then they could be entirely unrelated to what matters to us. For example, suppose that some god had decreed, in his wisdom, that it was “morally wrong” to wear a garment made from more than one sort of thread. That would be a morality that was unimportant, since we couldn’t care less; there is no good argument from human values for such a prohibition, and so such a “morality” would be entirely disposable.

Subjective does not mean arbitrary!

Nor does a subjective moral scheme amount to an arbitrary one. Human feelings and indeed human nature are not arbitrary. Indeed, much of our basic human nature derives from evolutionary programming, about which we have no choice. We can’t just decide to feel good about watching a child being tortured for no reason.

In contrast, it is the supposed “objective” rules, the ones that would be, by definition, unrelated to human values and human nature — the rules such as the prohibition on wearing garments of mixed thread — for which there are no good reasons, and which are thus arbitrary.

Subjective does not mean that one person’s values are no better than anyone else’s!

“So you are saying that one person’s morality is just as good as anyone else’s; Ghandi’s morality is no better than that of a sadistic mass murderer!” is the aghast complaint.

This complaint presumes that, if morals were subjective, then we would be unable to rank different people’s ethics. But we can indeed do so, simply by using our own evaluation of their merits. Most people would rate Ghandi’s morality above that of Stalin. What we can’t do is rank them objectively — that means, rank them without any reference to any human judgement on the matter.

One can, of course, ask people to rank different ideas, based on their values, and if one did that one would not find that everyone ranked equally. Indeed, most people have no difficulty at all in judging some people as moral exemplars and others as morally bad.

Subjective does not mean that you can’t tell someone else that they’re wrong!

“But if morality is subjective, then you can’t tell someone else that they’re wrong to lie or cheat or steal!!”

Oh yes you can, that is exactly what you can do. You are wrong to lie, cheat or steal. See, I just did! It is very easy to offer ones opinions on other people’s conduct, and indeed many of us are rather free with such opinions. Much of politics consists of people opining on the morality of the government’s policies, or those of opposing parties.

No moral philosopher has ever produced a coherent account of what objective notions of fairness or justice or morality (notions that would have to be entirely independent of human judgements) would even mean.

As a basic empirical fact, the world is full of people who have opinions about what is just, fair or moral, but there is a rather striking absence of any other form of justice, fairness or morality.

People try to influence society about these things, and societies make collective agreements about them. But, that’s it; people and their opinions and their values is all there is. There is nothing more to morality than that. There is no objective property of nature, no property akin to electric charge or gravitational mass, that determines what is moral. People can try to invoke gods to back up and embody their opinion as to what is moral, but such gods don’t actually exist. 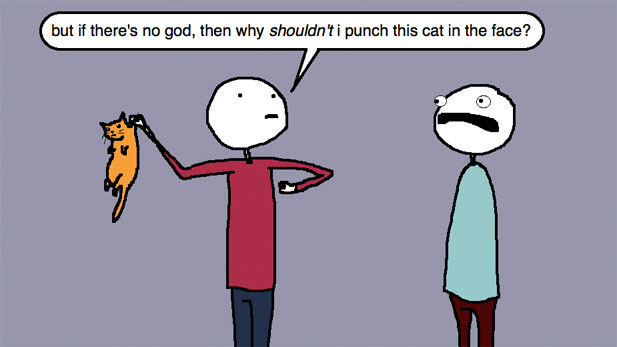 Because the guy on the right will dislike it (and so might you). [You might want a better reason than that, but that doesn’t mean that there is one.]

But whence the justification, the normativity?

At this point, those hankering after objective morality get really unhappy. If morality is “merely” about human opinion, whence the imperative behind it, whence the normativity?

Well, other than human feelings, there isn’t any. Sorry, but there isn’t. Morality really is about human feelings (including your own) about how humans treat each other. De facto, if you do something that other humans regard as heinous, then they might punish you; and you might also feel bad about it. But the gods won’t care, because there are no gods to care; and the rocks and trees and the clouds won’t care, because they are not the sort of things that care.

It is a fundamental misreading of nature to suppose that nature is moral. The physical universe is amoral, literally incapable of caring about morals. Darwinian evolution is amoral, being a blind and unfeeling process that is equally incapable of caring. But some products of Darwinian evolution — sentient beings that have evolved into social and cooperative ways of life — do care about how they interact with other members of their species.

But those hankering after objective morals don’t give up. If — as above — they declare their moral axioms and develop their moral frameworks, then surely we then have objective moral imperatives and thus objective normativity following from those axioms?

This doesn’t give normative force, it gives only a tautology. One could regard “moral” as a mere label for things that tend to maximise well-being, but a label doesn’t give normativity. Any attempt to extract normativity just results in a tautology or a declaration by fiat. Why should we do “the moral thing”? Someone’s feeling that you should do it really is the only normative force that there is.

If someone rejects your axioms and your moral framework, what is your recourse? Your only recourse is to appeal to values — either theirs or yours — and seek to persuade them based on their humanity and their values. That is the only basis for normativity.

Accepting that morality is subjective is counter-intuitive. Most humans feel intuitively that there must be some objective basis behind it. But, when examined, no attempt at making morality objective actually works. Subjective morality is all there is; but, also, it’s all we really need.

68 thoughts on “There is nothing wrong with morality being subjective!”