Alex Rosenberg’s An Atheist’s Guide to Reality is the most radically scientistic book that I’ve read. I should thus like it a lot! And generally I do, but with some reservations.

I’ll address here one argument that Rosenberg makes about morality and politics which I think is faulty, and, indeed, not “scientistic” enough. I’ve seen other atheists make the same argument so it is worth exploring.

Rosenberg argues — and I entirely agree — that our moral senses are part of our human nature. We have a “core morality” programmed into us by evolution to enable us to interact socially and so exploit a cooperative evolutionary niche. Of course evolution doesn’t care about the morality itself, it only cares (metaphorically “cares” of course) about what leads to us leaving more descendants. It follows that (page 286): “there are no facts of the matter about what is morally right or wrong, good or bad”. But it also follows, since humans are highly similar genetically, that “most people naturally buy into the same core morality that makes us tolerably nice to each other”. 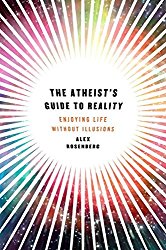 Rosenberg then argues, and again I agree, that the fact that we now understand human morality in such terms does not necessarily alter our moral feelings. Understanding why we have such feelings does not revoke those feelings or negate them. That might seem an obvious point, but many people argue that if there is no objective morality, if it really does come down “merely” to human feelings, then “there is no reason why we shouldn’t commit murder or torture children”. But yes, there is a reason, that reason is human feelings!

Scientism is nihilistic, but we are not. The Darwinian process that got us here included steps that selected for a pretty strong commitment to core morality. Even scientism can’t shake our emotions or the moral judgments that they produce. Knowing that morality is only good for our reproductive fitness, and sometimes not so good for us, can’t make us give it up. We are still committed to being nice.

But then comes the argument where I part company with Rosenberg.

But when you combine core morality with scientism, you get some serious consequences, especially for politics. In particular, you get a fairly left-wing agenda.

Rosenberg’s argument is based on determinism. None of us have “free will” in the dualistic, contra-causal sense, we are all products of the past and of our environment. Whether we were born into a rich family or a poor one, whether we are born with genes that make us talented or not, whether we grow up in an environment that helps us prosper, are all things that we could not choose. Whether we are a millionaire at age 30, or whether we are stuck in a minimum-wage job, is thus largely a lottery of birth.

Rosenberg then asserts that “core morality tells us that important advantages in life should be distributed in accordance with desert; inequalities should be deserved”. He argues that “core morality” requires that “deserving” acts must result from “free will” (and so cannot be acts determined by the prior state), and thence, since there is no such thing, there cannot be any “morally deserving” acts. Therefore there cannot be any justification for inequalities, and thus they are immoral. Hence the left-wing agenda requiring a much more even distribution of wealth.

I think that this argument is faulty. I think that it fails to distinguish between actual “core morality” and commentary about core morality. Rosenberg and I are agreed that “core morality” is the set of notions programmed into us by evolution to enable cooperative living. But evolutionarily-programmed morality will be feelings about how people act, because it is actions by other people that affect whether we leave descendants. Evolutionarily-programmed morality cannot be about metaphysical notions such as dualism or contra-casual free will, because evolution has no traction on such notions.

If a band of comrades agree to share the proceeds of a hunt, and then one member betrays the group by taking it all, then we have been programmed to have feelings about that act, because it is that act that affects whether the others can feed their children. It matters not to those feelings whether the act was determined, or whether it resulted from dualistic free will. Indeed, since Rosenberg is correct about determinism and the absence of dualistic free will, evolution will have programmed us to have feelings about the treachery even though that treachery was determined!

That follows from Rosenberg’s own logic. Our evolutionarily-programmed, “core morality” feelings must be about actions in a deterministic universe. We have such feelings about how other people act, even though those acts were determined. We thus cannot just decide: “well, since we now understand that the traitor’s actions were determined by prior circumstances, we don’t blame him and don’t feel at all angry”. We are programmed to feel that way about determined acts whether we like it or not. That’s what “core morality” is — it is about a deterministic universe. And, quoting Rosenberg again, we have evolved to have: “. . . a pretty strong commitment to core morality. Even scientism can’t shake our emotions or the moral judgments that they produce”.

Of course all of our genetic programming plays out through our development and upbringing, and the end product of our genetic recipe is heavily influenced by that environmental interaction. Thus scientific advances can certainly inform and influence our morals and how we feel. There is nothing “set” about core morality, it can indeed be heavily influenced — and obviously has been, if we think about how societal moral codes have changed over the centuries.

But it is not the case that accepting determinism will automatically lead to the radical changes in how people feel that Rosenberg suggests; people who accept determinism don’t automatically vote far left and ask for radical wealth redistribution. Indeed, compared to religiose America, lots of Europeans have accepted many of these ideas. But they tend to vote centrist or soft-left as much as hard left. People seem to be comfortable with a footballer earning much more than they do, even if they believe that his footballing ability is largely a genetic accident of birth. People don’t begrudge a successful entrepreneur getting rich, even if they think that his personality and ability are not “free will” acts. People are content that a lazy person or a spendthrift has little money, even if they think that his nature is not a “free will choice”, but is how he is. People really are making moral judgements about how people act — just as the evolutionary perspective would suggest — and the commentary about “free will” or whatever is secondary to that.