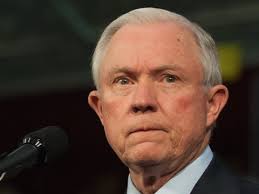 The US attorney general, Jeff Sessions, has issued a memo directing government bodies on how to interpret religious freedom. Unfortunately Sessions misinterprets religious liberty as granting religious people greater rights than the non-religious have. This is a violation of the deeper principle of treating all citizens equally, regardless of their religious views.

Viewed from the stance of equality we can properly understand religious freedom as a form of free speech. That is, you may espouse your religious views, and if you have a general right to do something you may do that same thing with added religious content. Further, the state may not treat you any less favourably owing to that religious content, but nor may it treat you more favourably.

From that perspective, let’s score Sessions’s memo, in which he declares 20 “principles of religious liberty”.

1. The freedom of religion is a fundamental right of paramount importance

Agreed. Score +1. Sessions rightly points to constitutional protections deriving from the Founding Fathers. In his Virginia Statute, Jefferson wrote perhaps the best one-line statement of religious liberty, that: “… all men shall be free to profess, and by argument to maintain, their opinion in matters of religion, and that the same shall in no wise diminish, enlarge, or affect their civil capacities”.

Note all three of “diminish, enlarge or affect”.

2. The free exercise of religion includes the right to act or to abstain from action in accordance with one’s religious beliefs

Wrong. Score 0. Religious freedom is a form of free speech and does not grant extra privileges when it comes to actions. If the law requires a non-religious person to “act or abstain from action” then it must demand the same of a religious person. Anything else would violate Jefferson’s maxim that “opinion in matters of religion … shall in no wise … enlarge … their civil capacities”.

If you think that requiring an act or abstention from a religious person would be too burdensome to their conscience then nor should you require it from a non-religious person. That is the deep principle of equality under the law that distinguishes a properly secular state from a theocracy in which the religious grant themselves additional privileges.

3. Freedom of religion extends to persons and organizations

Yes, ok. Score +1. People do not lose their rights simply because they group together and exercise them with like-minded citizens. The problem with the Hobby Lobby ruling was not that it allowed a corporation to have a religious identity, but that it granted extra privileges as a result, just as Sessions wants in the above (2).

4. Americans do not give up their freedom of religion by participating in the marketplace, partaking of the public square, or interacting with government.

Again, yes. Score +1. Citizens are expected and welcome to do all of those things, and they should not lose any rights thereby.

5. Government may not restrict acts or abstentions because of the beliefs they display

He’s on a roll! Score +1. This is a restatement of Jefferson’s “… opinion in matters of religion … shall in no wise … diminish … their civil capacities”. Equality demands that acts or abstentions must be treated equally, regardless of “the beliefs they display”. It is the acts and abstentions that the government may regulate, for secular reasons, but it must remain neutral regarding religious motive or lack thereof.

But note that if Sessions asserts both (5) and (2), then being religious becomes a one-way ratchet to additional privilege. It is (2) that should give.

6. Government may not target religious individuals or entities for special disabilities based on their religion

Agreed! Score +1 (Though on this one I may differ from other secularists.) I argued for this recently over the Trinity Lutheran case. If the state funds a general program to improve children’s playgrounds then it may not direct it to “… any and all groups except religious ones”. Again, Jefferson’s “in no wise diminish” principle is clear. (Though by the same arguments, this does mean that churches should pay taxes just like everyone else.)

7. Government may not target religious individuals or entities through discriminatory enforcement of neutral, generally applicable laws

Yes, indeed so. Another Score +1. But nor may it favour the religious by preferential exemptions from neutral, generally applicable laws. Surely this is the other side of the same coin? Otherwise the enforcement becomes discriminatory against the non-religious.

8. Government may not officially favor or disfavor particular religious groups

But nor may it favour religion as a whole over non-religion, nor religious people over the non-religious. Sessions rather omits that principle. Score half.

9. Government may not interfere with the autonomy of a religious organization

10. The Religious Freedom Restoration Act of 1993 prohibits the federal government from substantially burdening any aspect of religious observance or practice, unless imposition of that burden on a particular religious adherent satisfies strict scrutiny

Sessions is technically correct here, in that the RFRA does indeed say that. But it shouldn’t. Such a doctrine is a violation of equality under the law in that it doesn’t grant religious freedom, it grants religious privilege. So this scores a fat zero.

The mis-named RFRA is relatively recent, it is not part of the constitution, and it violates the previously accepted understanding of religious freedom.

11. RFRA’s protection extends not just to individuals, but also to organizations … 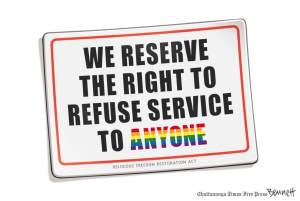 Except that RFRA promotes religious privilege rather than “protecting” religious freedom. Score 0. No court has ruled that the RFRA is constitutional. It blatantly violates the Lemon test, since it has no secular purpose — its purpose is to privilege religion — and further the principal effect of the statute is to advance religion. Rules that try to be neutral use a phrase such as freedom of “religion or belief”. The RFRA, though, privileges only religious beliefs.

12. RFRA does not permit the federal government to second-guess the reasonableness of a religious belief

Which is part of why it is wrong. It allows the religious (but not the non-religious) to claim exemptions from generally applicable laws on utterly unreasonable grounds. Score 0.

Further, if the government cannot assess the reasonableness of a religious belief, it would have to assess whether a belief counts as a religious belief, in order to apply the RFRA. And that is going to lead to “excessive entanglement” of state and religion, further violating the Lemon Test.

13. Government … substantially burdens an exercise of religion … if it .. substantially pressures the adherent to modify such observance or practice

Sessions here emphasizes just how general the RFRA actually is (Score 0); followed by:

14. The strict scrutiny standard applicable to RFRA is exceptionally demanding

And that has the potential to cause all sorts of trouble. Essentially it means that the government may only pass any law if it is the “least restrictive [on someone’s religious exercise] means of achieving a compelling government interest”, and anyone can challenge any law claiming it burdens their religion (no scrutiny of the reasonableness of this claim being allowed).

The government, according to Sessions, must “show that it cannot accommodate the religious adherent while achieving its interest through a viable alternative, which may include, in certain circumstances, expenditure of additional funds, modification of existing exemptions, or creation of a new program”.

15. RFRA applies even where a religious adherent seeks exemption from a legal obligation requiring the adherent to confer benefits on third parties

And that makes it clear how much the RFRA privileges the religious over the non-religious. Score 0. It’s also notable how much of Sessions’s analysis is based on the recent and highly dubious RFRA, not on the constitution or on long-accepted notions of religious liberty.

16. The Civil Right Act of 1964 prohibits employers from discriminating against individuals on the basis of their religion

17. The CRA protection extends to practice, as well as belief, unless the employer cannot reasonably accommodate the demand.

There has to be some give-and-take on this one. A good employer should accommodate a reasonable demand, but equally an employee should try to fit in with the needs of the business. Sessions wants the cards stacked in favour of the religious employee (but not the non-religious one). Score half.

18. The Clinton Guidelines provide useful guidelines for religious behavior in the workplace.

It does seem reasonable that an employee “may keep religious materials on their private desks” and wear “religious medallions”. But an employer might also want a dress code, presenting a corporate image, particularly for customer-facing staff. A straightforward test is whether wearing the symbol of one’s favourite sports team would be allowed. If yes, then a religious symbol should also be allowed. But if a dress code restricts the sports fan then it can legitimately restrict the fan of religion. Score half.

19. Religious employers are entitled to employ only persons whose beliefs and conduct are consistent with the employers’ religious precepts

20. Government may not condition receipt of grants or contracts on an organization relinquishing its religious character.

Sessions provides no justification for this requirement, and it is fundamentally wrong. Score zero. It would mean that, while a government may not itself promote religion, it may sub-contract any part of its business to organisations which do promote religion. This would amount to an end-run around the whole separation of church and state.

The government could then, for example, pay religious groups to run state schools, and the character of those schools would then derive from the religious organisation, not the government. Any organisation taking on sub-contracted government business must therefore adhere to government standards of neutrality over religion.

Overall score: 8 out of 20. At every stage, Sessions has considered what would be ideal from the point of view of a particular religious person, never considering the effect on others, or on society at large, or on anyone who might be disadvantaged by the privileged indulgence granted to religious belief. Personally I’d pick Thomas Jefferson’s conception of religious liberty over that of Jeff Sessions.