With the launch of NASA’s TESS satellite due this very day, this is a popular-level account of TESS and exoplanet hunting that I wrote for The Conversation (and which has been re-published by the BBC Focus Magazine). Actually this is my version, prior to their editing.

Previous generations have looked up at the stars in the night sky and wondered whether they are also orbited by planets; our generation is the first to find out the answer. We now know that nearly all stars have planets around them, and as our technology improves we keep finding more. NASA’s newest satellite, TESS (the Transiting Exoplanet Survey Satellite), scheduled for launch on Monday, will extend the hunt for small, rocky planets around nearby, bright stars. END_OF_DOCUMENT_TOKEN_TO_BE_REPLACED

One notable aspect of research into extra-solar planets is that both the media and the wider public are very interested. The first press release that I ever wrote, on the discovery of the first planets by our Wide Angle Search for Planets collaboration, back in 2007, ended up in TIME magazine as number 6 in their “Top 10 Scientific Discoveries” of the year. But the days of easy publicity for merely discovering a planet have passed. With astronomers worldwide having now found over 1000 exoplanets, it is getting harder to find a new angle when writing a press release. 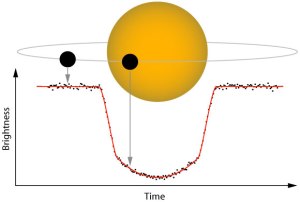 Our WASP project uses arrays of cameras to monitor millions of stars in order to look for tiny dips in their light caused by a planet orbiting in front of them. This requires a huge data-processing operation and the need for sophisticated search algorithms to look for the transit events.

The big problem is that the data, being obtained looking through Earth’s atmosphere, are hugely noisy. In the end, we need a human to help out the computer algorithms and make a judgement about what is likely to be an actual transit event. And that requires looking at lots and lots of light-curves of lots and lots of stars.

When I got an email from a 15-yr-old schoolboy — Tom Wagg — saying that he was keen on science and asking if he could join my research group for a week of work-experience, I figured that a bright 15-yr-old would be as good at that sort of pattern-recognition task as the best computer algorithms. So, I trained him up by showing him all the planet-transit dips that we’d already found, and set him the task of finding more of the same in our extensive data archive. END_OF_DOCUMENT_TOKEN_TO_BE_REPLACED

How many generations of humans have looked up at the night sky and wondered how many of stars had planets around them? Perhaps it is only a few, since early humans would have considered our planet and our star to be unique, and would have looked at other stars without comprehending that they were the same as our sun, only at a vast distance. But ours is the first generation to know the answer, that most stars do indeed have planets around them. 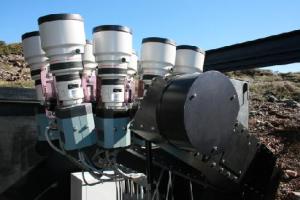 My research involves looking for such extra-solar planets. We operate the WASP-South transit survey, which is an array of cameras out in the South African desert which photographs the night sky repeatedly, every clear night, building up light-curves of millions of stars, watching for small dips in their light caused by a planet passing in front of the star, once per orbit.

The depth of the transit dip tells you the fraction of the star that is occulted by the planet, and thus, if you know the size of the star, you obtain the size of the planet. You can then find the mass of the planet by the gravity it exerts on the host star, which you measure using the Doppler shift of the star’s light as it is rhythmically tugged to-and-fro as the planet orbits. The combination of size and mass tells you that planet’s density, and from that you have a fair idea of what it is made of. END_OF_DOCUMENT_TOKEN_TO_BE_REPLACED