In my first post on this blog I wrote a lengthy piece analysing Nazi theology and racial ideology, showing that it was religious, creationist and opposed to Darwinian evolution. Since that piece is somewhat long I thought I’d produce a succinct ‘sound bite’ version of Hitler’s views on religion and atheism. Repeating this is unfortunately necessary, since, as exemplified by Pope Ratzinger, Christians all too often tell the lie that Hitler was an ‘atheist’, a claim arrived at by Christian logic: “the Nazis were nasty; atheists are nasty; therefore the Nazis were atheists”. Despite this claim, repeated so often that even some atheists think it must be true, Hitler despised atheism almost as much as Herr Ratzinger does. 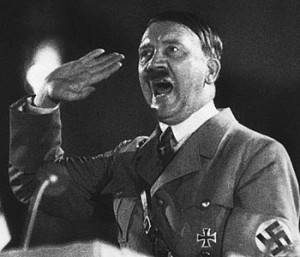 “Hence this song [The German anthem] also constitutes a pledge to the Almighty, to His will and to His work: for man has not created this Volk, but God, that God who stands above us all. He formed this Volk, and it has become what it should according to God’s will, and according to our will, it shall remain, nevermore to fade!” (Hitler, speech, July 31, 1937, Essential Hitler, p161)

“Everybody who has the right kind of feeling for his country is solemnly bound, each within his own denomination, to see to it that he is not constantly talking about the Will of God merely from the lips but that in actual fact he fulfils the Will of God …”  (Hitler, Mein Kampf)

“Hence today I believe that I am acting in accordance with the will of the Almighty Creator: by defending myself against the Jew, I am fighting for the work of the Lord”  (Hitler, Mein Kampf)

“The most marvellous proof of the superiority of Man, which puts man ahead of the animals, is the fact that he understands that there must be a Creator.”  (Hitler’s Table Talk)

“My feeling as a Christian points me to my Lord and Savior as a fighter. It points me to the man who once in loneliness, surrounded only by a few followers, recognized these Jews for what they were and summoned men to fight against them.”  (Hitler, speech, April 12 1922).

“Secular schools can never be tolerated because such schools have no religious instruction, and a general moral instruction without a religious foundation is built on air; consequently, all character training and religion must be derived from faith.”  (Hitler, speech April 26, 1933)

“They [the Churches] even enter into political intrigues with the atheistic Jewish parties against the interests of their own Christian nation”  (Hitler, Mein Kampf)

“For their interests [the Church’s] cannot fail to coincide with ours [the National Socialists] alike in our fight against the symptoms of degeneracy in the world of to-day, in our fight against a Bolshevist culture, against the atheistic movement, against criminality, and in our struggle for a consciousness of a community in our national life.”  (Hitler, speech, from The Speeches of Adolf Hitler)

“It is my conviction that the human beings God created also wish to lead their lives modeled after the will of the Almighty.”  (Hitler, speech June 27, 1937, p153 of Essential Hitler)

“We have therefore undertaken the fight against the atheistic movement, and that not merely with a few theoretical declarations: we have stamped it out.”  (Hitler, speech in Berlin on October 24, 1933) 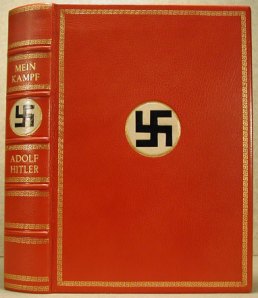 “Whoever would dare to raise a profane hand against that highest image of God among His creatures [Aryans] would sin against the bountiful Creator of this marvel and would collaborate in the expulsion from Paradise.”  (Hitler, Mein Kampf)

“An uneducated man, on the other hand, runs the risk of going over to atheism (which is a return to the state of the animal).”  (Hitler’s Table Talk)

“I believe that it was also God’s will that from here a boy was to be sent into the Reich, allowed to mature, and elevated to become the nation’s Fuhrer, thus enabling him to reintegrate his homeland into the Reich. There is a divine will, and all we are is its instruments”  (Hitler, speech April 9, 1938, Essential Hitler, p162)

“National Socialism neither opposes the Church nor is it anti-religious, but on the contrary, it stands on the ground of a real Christianity.”  (Hitler, speech, from The Speeches of Adolf Hitler) 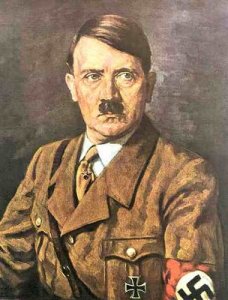 “By its decision to carry out the political and moral cleansing of our public life, the Government is creating and securing the conditions for a really deep and inner religious life. The advantages for the individual which may be derived from compromises with atheistic organizations do not compare in any way with the consequences which are visible in the destruction of our common religious and ethical values. The national Government sees in both Christian denominations the most important factor for the maintenance of our society.”  (Hitler, speech at the Reichstag, March 23, 1933)

“The struggle against the materialistic ideology and for the erection of a true people’s community serves as much the interests of the German nation as of our Christian faith. The national Government, seeing in Christianity the unshakable foundation of the moral and ethical life of our people, attaches utmost importance to the cultivation and maintenance of the friendliest relations with the Holy See.”  (Hitler, speech at the Reichstag, March 23, 1933)

“This human world of ours would be inconceivable without the practical existence of a religious belief. […] faith is absolutely the only basis of a moral outlook on life. […] the attack against [religious] dogma is comparable to an attack against the general laws on which the State is founded. And so this attack would finally lead to complete political anarchy if it were successful …”  (Hitler, Mein Kampf)

“We want to fill our culture again with the Christian spirit […] We want to burn out all the recent immoral developments in literature, in the theater, and in the press […] in short, we want to burn out the poison of immorality which has entered into our whole life and culture as a result of liberal excess during the past years.”  (Hitler, speech, from The Speeches of Adolf Hitler)

“Even today I am not ashamed to say that, overpowered by stormy enthusiasm, I fell down on my knees and thanked Heaven from an overflowing heart for granting me the good fortune of being permitted to live at this time.”  (Hitler, Mein Kampf)

“We can recall how Britain and her leaders stood against a Nazi tyranny that wished to eradicate God from society […] As we reflect on the sobering lessons of the atheist extremism of the twentieth century, let us never forget how the exclusion of God, religion and virtue from public life leads ultimately to a truncated vision of man and of society …”   (Pope Ratzinger’s lies claiming that the Nazis were atheists, during his visit to the UK, September 2010)

Ratzinger has form in blaming everything on ‘secularism’. In his partial apology for the rampant sexual abuse of children by Catholic priests he tried to blame the systematic and deliberate cover-up of such crimes by the Catholic Church on the ‘secularization’ of society which had led priests ‘to adopt ways of thinking and assessing secular realities without sufficient reference to the Gospel’ and hence ‘a well-intentioned but misguided tendency to avoid penal approaches to canonically irregular situations’.

The irony is that both Ratzinger and Hitler adopt the same tactic, demonizing groups which refuse to accept the Christian god. While Ratzinger blames the ills of society on ‘aggressive secularism’, ‘atheist extremism’ and ‘intolerant agnostics’, Hitler similarly blamed all the ills of Germany on ‘materialistic ideology’ and ‘atheistic Jews’.

For more on Nazi religion see my longer post showing that Nazi racial ideology was religious, creationist and opposed to Darwinism. The website nobeliefs.com contains a good compilation of material on Hitler and Nazi religion, including Nazi religious photos and Nazi religious artifacts (from which many of the pictures in this post are taken).

Two good academic books on the subject are: