Theoretical physicist Sabine Hossenfelder recently wrote that that “predictions are over-rated” and that one should instead judge the merits of scientific models “by how much data they have been able to describe well, and how many assumptions were needed for this”, finishing with the suggestion that “the world would be a better place if scientists talked less about predictions and more about explanatory power”.

Others disagreed, including philosopher-of-science Massimo Pigliucci who insists that “it’s the combination of explanatory power and the power of making novel, ideally unexpected, and empirically verifiable predictions” that decides whether a scientific theory is a good one. Neither predictions nor explanatory powers, he adds, are sufficient alone, and “both are necessary” for a good scientific theory. END_OF_DOCUMENT_TOKEN_TO_BE_REPLACED

Philosophers Maarten Boudry and Massimo Pigliucci have recently edited a volume of essays on the theme of scientism. The contributions to Science Unlimited? The Challenges of Scientism range from sympathetic to scientism to highly critical. 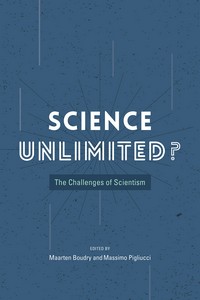 I’m aiming to write a series of blog posts reviewing the book, organised by major themes, though knowing me the “reviewing” task is likely to play second fiddle to arguing in favour of scientism.

Of course the term “scientism” was invented as a pejorative and so has been used with a range of meanings, many of them strawmen, but from the chapters of the book emerges a fairly coherent account of a “scientism” that many would adopt and defend.

This brand of scientism is a thesis about epistemology, asserting that the ways by which we find things out form a coherent and unified whole, and rejecting the idea that knowledge is divided into distinct domains, each with a different “way of knowing”. The best knowledge and understanding is produced by combining and synthesizing different approaches and disciplines, asserting that they must mesh seamlessly. END_OF_DOCUMENT_TOKEN_TO_BE_REPLACED

The cosmological “multiverse” model talks about regions far beyond the observable portion of our universe (set by the finite light-travel distance given the finite time since the Big Bang). Critics thus complain that it is “unfalsifiable”, and so not science. Indeed, philosopher Massimo Pigliucci states that instead: “… the notion of a multiverse should be classed as scientifically-informed metaphysics”.

Sean Carroll has recently posted an article defending the multiverse as scientific (arXiv paper; blog post). We’re discussing here the cosmological multiverse — the term “multiverse” is also used for concepts arising from string theory and from the many-worlds interpretation of quantum mechanics, but the arguments for and against those are rather different. END_OF_DOCUMENT_TOKEN_TO_BE_REPLACED

Philosophers of Science have long puzzled over what they call “the” demarcation problem, of how to distinguish science from pseudoscience. In the early 20th Century the Logical Positivists proposed the verification principle, that a statement was meaningful and scientific only if it could be empirically verified. Karl Popper then proposed a similar idea, that a scientific idea is one that can be falsified.

There is a lot of truth in both proposals, but neither can be interpreted too narrowly. The problem is that no statement can be verified or falsified in isolation. Science constructs whole webs of ideas, and it is the whole construct that is then compared to empirical data, to be adjusted and improved as necessary. Further, a statement such as Newton’s law of gravity can never be verified in the general sense, all we can say is that it worked well enough — as part of the wider web of ideas — in the particular instance we tested. Nor is it straightforward to falsify such a law. If our overall model is inconsistent with an observation then we could indeed alter one of the laws; but we might also overcome the inconsistency by altering some other part of the overall model; or we might doubt the reliability of the observations. END_OF_DOCUMENT_TOKEN_TO_BE_REPLACED

Falsifiability. as famously espoused by Karl Popper, is accepted as a key aspect of science. When a theory is being developed, however, it can be unclear how the theory might be tested, and theoretical science must be given license to pursue ideas that cannot be tested within our current technological capabilities. String theory is an example of this, though ultimately it cannot be accepted as a physical explanation without experimental support.

Further, experimental science is fallible, and thus we do not immediately reject a theory when contradicted by one experimental result, rather the process involves the interplay between experiment and theory. As Arthur Eddington quipped: “No experiment should be believed until it has been confirmed by theory”.

Sean Carroll recently called for the concept of falsifiability to be “retired”, saying that:

The falsifiability criterion gestures toward something true and important about science, but it is a blunt instrument in a situation that calls for subtlety and precision.

Meanwhile, Leonard Susskind has remarked that:

Throughout my long experience as a scientist I have heard un-falsifiability hurled at so many important ideas that I am inclined to think that no idea can have great merit unless it has drawn this criticism.