I am the latest to fall foul of Twitter’s attempts to impose a particular ideology by labelling any dissent as “hateful”. I Tweet only occasionally with only a small number of “followers”, and so a month-old Tweet of mine would be seen by almost no-one unless they were deliberately searching for Tweets to be “offended” by.

The Tweet that supposedly amounted to “hateful conduct” is this one, which I reproduce here in the (slight) hope that doing so might irritate the sort of person who reports such Tweets: 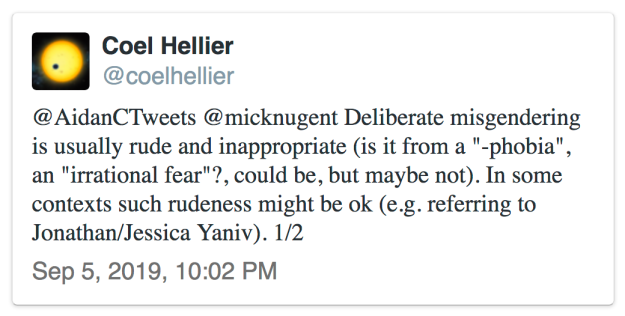 The named person, Jessica/Jonathan Yaniv is a Canadian transgender person. He has a biologically male body with male genitals but identifies as a woman. I use the pronoun “he” because the story is about his genitals — he made it so — and his genitals are male. (And who decided that the pronouns “he” or “she” are more about gender than about biological sex?)

He wanted his genitals waxed. He could have gone to any number of parlours that wax male genitals. He didn’t, he decided to make trouble. He instead contacted over a dozen parlours that offer the service only to those with female genitals, and when they declined to accommodate him he sued for discrimination. The case is still being decided.

He is also, if not actually a sexual predator targetting young girls, then he is close to being one. Amongst other things he has openly discussed that he might. approach naked young girls in bathrooms, and has tried to organise events at his local swimming pool at which young teenagers would be topless and at which their parents would be excluded. Many transpeople regard him as a complete embarrassment.

He also makes a habit of taunting others on Twitter in order to get them banned when they respond, and Twitter — being hypersensitive to the “crime” of misgendering — is often happy to oblige him.

Note that my above Tweets does not “misgender” him or anyone else (and he regularly uses both first names himself). It even says that misgendering him could be “rude”. But it then says that in “some contexts” such rudeness might be “ok”, which I think it is.

Twitter decided that saying this was “hateful” and so locked my account until I deleted the Tweet. (Meanwhile, any number of Tweets openly calling for the death of apostate ex-Muslims get a free pass; yet they will readily ban the ex-Muslims for simply criticising Islam.)

The most Orwellian aspect is that the Tweet itself is not rude or hateful, it is merely discussing what would be acceptable. But the modern tactic for winning an argument is to claim that any disagreement is “hateful”. Not only do they want to regulate acceptable conduct, they also want to prohibit any discussion of such regulations. They propose the rules; you are not even allowed to question them! Even questioning the rules implies that you don’t accept their ideology, and that is “hateful” because it makes them feel “unsafe” (“unsafe” being the trendy synonym for “disagreed with”).

At this point, of course, many would be thinking: But Twitter is a private company, it can do as it likes. I don’t think this reply works. Companies such as Twitter, Facebook and Google have such market dominance in their niche that they are near-monopolies. And it is generally accepted that monopolies should be regulated for the public good.

Nowadays the internet and social-media companies are part of society’s infrastructure, and so should be available to all. Providers of electricity, water, roads and broadband are often private companies, but it would be quite wrong for them to start declining service to customers on political grounds.

Further, where one social-media company goes, the others often follow in a display of sympathetic virtue signalling. So far, WordPress has not been prone to politically motivated bans, so I’m presuming that reproducing the Tweet here will be fine, but we’re not that far from a world in which the big internet companies might act in concert, not only to dictate what can and cannot be said on the internet, but then to disallow any discussion of the fact that they are doing this!

Patreon banned a prominent user, not for anything said on, or linked to from that platform, nor for any creation funded through Patreon, but for speech elsewhere on the internet. It claimed the right to police that person’s entire online presence. Even a company such as PayPal, which doesn’t host content but only provides an infrastructure service, has banned customers when it does not like their politics. The activists won’t stop there, and are already trying to ensure that some voices cannot get even basic website-hosting services.

The power to do these things is currently in the hands of relatively few CEOs of relatively few companies, with sufficient market dominance that they are not really accountable to anyone. I think this is dangerous. A free society thrives on free debate and the right to dissent. Issues of free speech and censorship are not only about what the government will allow you to say, they are about what you can, de facto, say in the ongoing “public square” conversation. They are about being able to say something in a manner that other people, if they are interested and take the trouble to look, can then encounter.

Too many people, its seems to me, are looking at the above bans and deciding they don’t like the particular people who were banned, and are therefore failing to take a Voltaire-esque perspective on the principle of banning opinions that one doesn’t like.

Academia is often in the vanguard of ideological fads, and thus is where the desire to ban contrary thoughts is most blatant. One fad is “critical race theory”, and the consequent denunciation of colonialism as an unmitigated bad. The mere publication of a contrary perspective, from Bruce Gilley, led to mass hysteria, including a mass-resignation of the editoral board, threats of violence, and the withdrawal of the paper. There’s no doubt that such activist academics would completely censor dissenting opinions if they had the power; they don’t want to debate such opinions or show why they are wrong, they just want to ban them.

Legions of undergraduates are being taught such ideologies in activist university departments, and then they seek careers in the media and the social-media companies, where they then can then pull levers to promote their causes.

That’s why internet and social-media companies with market dominance should now be treated as societal infrastructure, available to all, and should be regulated to ensure that they are politically neutral. Infrastructure companies who see themselves as activists with a mission to impose particular ideologies on society are not a good thing.